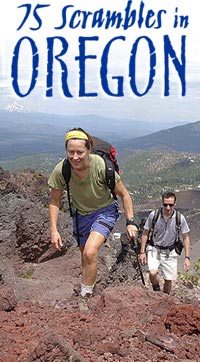 For examples of Barbara's writing and photography
visit barbaraibond.com

Calling all hikers with a yen for high, lonely places: you can bag that peak if you want to. 75 Scrambles in Oregon will take you to some of the same summits that climbers enjoy, but by less extreme routes.

Non-technical ascents of popular peaks including Mount Hood, the Sisters, Mount Thielsen, and Mount McLoughlin, as well as lesser-known peaks.

Routes are rated for difficulty and skill level. Where nonstandard equipment such as an ice axe, crampons, rope, or helmet are advised, that is noted route by route.